Dave Chappelle Has Netflix Remove ‘Chappelle’s Show’ From Its Library 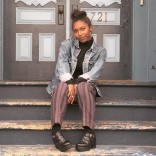 Young Black skateboarders from Los Angeles have taken the blueprint established by the Z-Boys and expanded upon it, using their skateboarding roots to venture into other creative worlds ranging from fashion and film to activism and music.

In the 1970s, skateboarding in Los Angeles was popularized by a group of thrill-seeking, beachside kids who called themselves the Z-Boys.

The Santa Monica and Venice-based skate group quickly gained a cult following, which allowed for members of the team to pursue entrepreneurial opportunities like brand deals with Vans and the creation of their own skate gear companies, thus establishing the profitability of the sport. The Z-Boys embodied the communal charm of skateboarding — a group of young, athletic misfits who existed a little left of center. They also foreshadowed skateboarding’s rise throughout California and, ultimately, the world, all while providing a blueprint for future creatives hoping to build their dreams into legitimate business ventures. Decades later, and it’s young Black skateboarders from Los Angeles who’ve taken that blueprint and expanded upon it, using their skateboarding roots to venture into other creative worlds ranging from fashion and film to activism and music.

Prior to the 2000s, skateboarding was rarely associated with the Black community. Sports like basketball and football were the default choices. But Los Angeles’ environment provided a prime backdrop for skating and appealed to a diverse demographic of kids looking to spend hours outside the house, skateboarding under the Southern California sun. Travis Bennett, a DJ more commonly known as “Taco” of the Odd Future rap collective, said that skateboarding’s success in LA stems from the city’s weather and the wealth of well-paved ground.

“We don’t live in a place that’s mad green, it’s a city with streets and sidewalks,” Bennett said. “And since skating came from here, I feel like it’s been passed down generationally to the misfits…if you didn’t fit in with the jocks or the nerds, it just made sense to you.”

Beyond skateboarding’s appeal to the rebellious teens of California, Bennett credits one pro skateboarder. in particular, for bringing the sport to LA’s urban Black communities: Terry Kennedy.

“He was the first skater that looked like a rapper,” Bennett said. “He had chains on, grills on, drove cool cars…[he started it off] for kids who wanted the lifestyle of a rapper or a basketball player…he was the first superstar athlete skater.” Kennedy, originally from Long Beach, California, was not only a professional skateboarder, but also co-founded Fly Society, a clothing and music brand, in 2007. The renaissance man would go on to release rap mixtapes and become even more of a household name thanks to his BET reality TV series, Being Terry Kennedy, which debuted in 2010. A large part of the show’s success had to do with the fact that seven years prior, when Kennedy was 18 years old, Pharrell had selected the rapping skateboarder to be the team captain of his budding skate team, Ice Cream.

Like Kennedy, Virginia Beach-born Pharrell Williams played a major role in the fusion of skateboarding, music, and fashion, especially in the way this aesthetic exists in mainstream culture today. Williams, affectionately known as “Skateboard P,” put the possibility of being an alternative Black kid — more interested in exploring his creativity than living conventionally — on the map. Through his Ice Cream skate team, Williams offers alternative Black kids a platform, from Kennedy and Kevin Booker to Andre Beverley and Jamel Marshall.

“Pharrell was the one that showed everybody that you can do everything,” Bennett said. “He was really the godfather of all of this….he showed us you could do it all, you don’t have to be the tough guy with the guns.”

Williams’ fusion of skating and other creative endeavors was emulated in the 2010s by Tyler, the Creator. The Odd Future founder was an avid skater before becoming the multi-hyphenate creative he is now, having built not only a successful music career but fashion brand (Golf Wang) and music festival (Camp Flog Gnaw Carnival). Tyler is the most prominent Black Los Angeles creative whose skating roots grew into other creative ambitions. But there’s others, too: guitarist Garrett Stevenson of DIY punk band Trash Talk, who co-founded Babylon LA — a branded retail store, community center, and Hollywood skatepark — and Mikey Alfred, the creator of LA skate crew and production company Illegal Civ, as well as one of the producers on Jonah Hill’s 2018 film mid90s.

“…that’s my whole goal — just building our own institutions and teaching people to stop being timid,” Alfred said when explaining the importance of Illegal Civ to Okayplayer last year. “It’s like everyone in our communities are tough in the wrong situations. It’s like be tough about your future. Be tough about your career.”

Los Angeles saw an overlap between skateboarding culture and streetwear culture in the 2010s, embodied in an area that has been referred to as “The Mecca of Streetwear” — Fairfax Avenue. A stretch of central Los Angeles surrounded by historically Jewish businesses and neighborhoods, Fairfax Avenue became a veritable pilgrimage site for devotees of streetwear brands. Before Tyler opened his own store on the street in 2017, he and the rest of his Odd Future cohorts spent most of their time frequenting Fairfax Avenues’ stores, some of which were founded by skaters (like Nick Diamond’s Diamond Supply).

“Seeing Nick Diamond, like skater cats turning their clothes into a corporate business, pulling in figures…it was free college, [we] soaked it up and paid attention to what was going on,” Anwar Carrots, a co-founder of the cult streetwear brand Peas & Carrots and friend of Tyler’s, said of the pairing of skate culture and streetwear culture happening on Fairfax. “That was just where everything like that was coming together.”

Na-Kel Smith, a young professional skateboarder (he’s part of Supreme’s skate team) associated with Odd Future, grew up visiting the retail-laced Fairfax too. Although he’s now like Tyler and Pharrell, exploring various creative ventures, Smith said skateboarding allowed him to find freedom in the embrace of other passions too.

“I think more than anything skating helped me gain good taste,” Smith said. This taste extended to Smith’s decision to sign on for his first commercial movie role in Jonah Hill’s Mid90s as the show-stealing Ray, a character that befriends the film’s main character Stevie (portrayed by Sunny Suljic).

“When it was time to do Mid90s, I was so stressed. I just thought, like, ‘I’m really taking this step. I don’t know how people are gonna view me after this,'” Smith said. “I had to put so much pressure on myself to feel comfortable and remain solid in my thought of like, ‘OK, I’m doing this.'”

Beyond his budding acting career and fully-established skateboarding one, Smith also raps. He had one of the most memorable guest verses of the decade on on Earl Sweatshirt’s “DNA” from 2015’s I Don’t Like Shit, I Don’t Go Outside album. Smith’s second EP, 3000nakteen, dropped last October.

“I like making music. I enjoy it sometimes even more than skating because of the pressure that’s getting put on me,” the pro skater said. “I found other things that I love to do…JAY-Z did not get a billion dollars off of just rap.”

Smith’s ability to move through different creative worlds seemingly effortlessly is a testament to one of skateboarding’s core values: rawness of expression.

Where Bennett, Smith, and others have shown how skating can create paths to other creative pursuits, Briana King has shown how it can be used to mobilize people.

A model, skateboarder, and community organizer, King grew up skating in Los Angeles County’s San Gabriel Valley, but eventually took a long hiatus because the dudes who claimed ownership of the sport never fully accepted her.

“The only thing I knew about [skating] was that [it] looks so fucking cool,” King said. “It was like dancing. I fell in love with it because of the actual action of it.”

Before she was a nationally-recognized skateboarder leading girl and queer skate sessions across the country, King’s creative career first took off thanks to modeling. But the pressure of perfection took a toll on her, and she returned to skateboarding more seriously in an effort to find fulfillment elsewhere. “When I started skateboarding I was like, ‘I never felt that happy before. I never felt that free before,” King said. “…everyone’s going hard, everyone’s teaching each other, everyone’s learning something new.” King’s first experience truly being embraced in the sport came when she moved to New York in 2017 and met a group of girls who encouraged her to skate with them and be herself. This experience inspired her to share that same spirit of empowerment with young skaters hoping to find that same freedom she’s always chased. Since then, King has created the Girl and Queer Skate Sesh Tour, a nationwide event open to skaters of all ages and skill levels, that has made waves in the skate community for the way it privileges genuine support over competition.

“I’m fearless. I’m comfortable with fear. Every time I’m on my board and I’m scared, [I’m] definitely fearful of taking care of my body, but it’s just like, ‘I’m going to be good. It’s okay to be scared,’” King said. “I’m okay with this feeling, like it feels good. Before I started skating, I was so scared of traveling or going places without my friends around, but I finally got [so] used to the feeling of just being comfortable because of skateboarding, that I could travel everywhere in LA by myself…I didn’t see any of that until I started skating.”

It’s this fearless approach to the sport (and life, more broadly) that illustrates just how these young skateboarders have been able to occupy all sorts of creative spaces, while remaining true to the sport that first challenged them to move without fear. “I’ll ride a 15-stair rail and that’s like one of the biggest mental and physical battles to think about,” Smith says. “Unless you really skate, nobody is about to jump onto a 15-stair handrail.” Skateboarding, as both a professional sport and casual hobby, has continued to progress as a result of people like Smith refusing to be confined by limitations. From LA’s empty swimming pools to the city’s concrete streets and skate parks, skaters have used their roots in the sport to expand into other territories, their creative exploration ignited by their early days spent cruising aimlessly around LA with nothing but their board.

Apparently, staring down a new challenge, whether it be a 15-stair handrail or a breakout film role, is the first step to overcoming it. According to Smith: “I look at the world like that, like I’d rather skate than walk.”

Evan Nicole Brown is a Brooklyn-based freelance writer who focuses on music, culture, art, and identity. She’s written for Chicago magazine, Office magazine, and Atlas Obscura. She can be found on Twitter here.

What is the Future For Black Sex Workers on OnlyFans?