Questlove to Host A New Digital Series on Mastering Creativity

Behind the Beat: Ski Beatz & Camp Lo Created a New Language With “Luchini AKA This Is It”

Thanks To Dave Chappelle, Netflix Has The Top Trending Video Of 2020 On YouTube

André 3000 Has Championed Young Thug More Than Once. So Why Did Thug Dismiss Him?

It Took Fans Almost a Decade to Realize Tyler, the Creator Was in ‘Grand Theft Auto V’

Lil Wayne Shouts Out Donald Trump on ‘No Ceilings 3’ Track 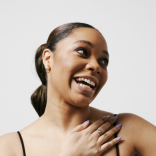 Everyone has their ways of coping with what 2020 has thrown their way. For Tayla Parx her mind hasn’t remained idle. Instead, she’s embraced gardening and home renovations, both hobbies are how she’s decided to spend her time during COVID-19-related quarantine. “I have so many different kinds of tomatoes, cucumbers, lettuce and peppers,” Tayla said over a phone call. “I’ve been all about that self-sustainable life and I’ve been into really making my house super sustainable, composting. Things like that.”

Beyond gardening and home improvement projects, Parx has also been steadily wrapping and breathing life into her new album Coping Mechanisms (released on Friday, November 20th.) The title speaks to the dumpster fire that this year has been. But it also is a result of Tayla creating space for herself to reflect and understand the inner workings of who she is as an artist amid the pandemic.

“So I started [the album] in the middle of [a] tour. And, it evolved over time. I ended up finishing it up over here in LA at my home,” she said. “It’s just been interesting to see how it evolved because we were coming out of heartbreak and into this moment of being like, ‘How do you cope with all of these new emotions that you’ve never kind of had to feel before?’ And then we got hit with the quarantine. So it was another way of coping but I was able to get through it as you will hear on the album.”

Her “heartbreak” — which came after a breakup — and quarantine created the perfect storm that allowed Tayla to dream up a sophomore album that she believes is another part of her artistic journey. The follow-up to We Need To Talk arrives weeks after Ariana Grande’s chart-topping Positions released. Tayla Parx wrote seven songs on the release. “My favorite song from [Ariana’s] album is ‘pov,’ Parx said. “I think lyrically and melodically that song is just extremely special to me.” This track which displays Grande’s vocal range emphasizes how as a songwriter Tayla relies on raw emotion. At its core, the song touches on acceptance and trust issues. (Parx also said that Ariana’s mom was pleased with this track.)

Originally from Dallas, Tayla grew up loving soul and R&B music. She also is grateful that her parents had what she calls “good taste” in music that was “melody-driven.” Parx recalls being most drawn to Erykah Badu, Brian McKnight, and Babyface. She admits when she was younger she didn’t realize these three artists were also singer-songwriters.

At 12 years old, Tayla Parx enrolled at Debbie Allen’s Dance Academy in Dallas. She says Allen introduced her to dancing and acting, she also shares she was a “sponge” during this time in her life. That same year at 12 she landed a role as Little Inez Stubbs in the film adaptation of Hairspray the musical. She went on to sign a songwriting deal with Warner Chappell Music when she was 19.

“College is when I started to get into rap and other things like that. But before that, it was pretty much just beautiful music,” she said. “Beautiful music was country music, classical music, and R&B, obviously. Before that in high school, I kind of started to get into Paramore and [went] back [to listen] to songs from the ’60s, like rock. So by the time I was coming into my professional songwriting career, it was kind of a mixture of all of these different elements.”

The fusion of inspirations ranging from pop, rock, rap R&B, and soul is what landed Parx at the genre-blending sound she’s working with, a “genre gumbo” is what she calls it.

“A lot of where my music comes from, is just from my heart and my soul and the lyrics and then my perception of the experiences that we all go through,” Parx said. “I think that’s the point of releasing anything as a creator, to get your side of the story out. And you can only do that when you are being true to who you are in that moment, which naturally changes based on who you fell in love with, who you hate right now, [or] who hurt you.”

Coping Mechanisms focuses on “allowing yourself to be open.” The openness is apparent on tracks like “Dance Alone,” the lead single on the album produced by Oscar Görres and Jeff “Gitty” Gitelman. On the process for that track, she recalls, “I had these guitar chords and I was like, “I only got two chords” that I have in mind but maybe just go back and forth with these two and obviously, Jeff is such an incredible instrumentalist so they just kind of built it up.” She adds that the single is wanting to dance with someone despite going through some things.

“Nevermind” explores how Tayla needs to break old habits. “Sometimes it can be easy to fall back into the person that you’re used to being. And that person that you’re used to being instead of making that progress towards something that’s healthier,” she said. Parx says when she feels like this the best advice she’d give for those dealing with the same thing is to walk away. But, the song is honest about the human feeling about potentially changing your mind, hence the title “nevermind.”

During our call, Tayla shared that she’d like fans to walk away from the album knowing all humans cope with things similarly. “Throughout this album, you see me cope differently. Sometimes you’re seeing me turn up and kind of being avoidant,” she said. “I think that hearing all of those different coping mechanisms and music forms will allow people to be like, ‘Okay, I have an idea of maybe how I want to approach the next situation,” Tayla Parx said.

Behind the Beat: Ski Beatz & Camp Lo Created a New Language With “Luchini AKA This Is It”